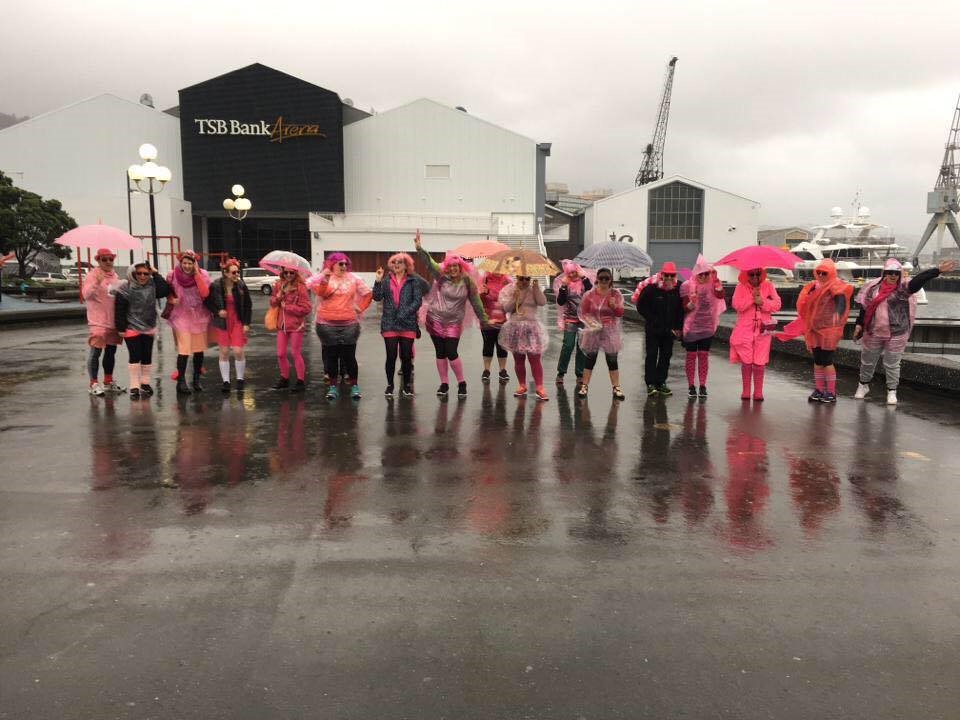 I’ve been doing this a few years now - this is my sixth walk, although not all are sequential. Dressed in various shades of pink from tip to toe so as not to stand out, but to blend into a sea of people. Men and women, children, grandparents, aunts and uncles - all with the same kind of crack in their heart as me. I’ve had plenty of reasons not to do it - a PhD, excruciating fibromyalgia and torrential rain!

One year I slept for two weeks solid after the 5 km Pink Star walk, which is crazy, because I used to love running and walking before my diagnosis; fibromyalgia has zapped my strength but not my spirit. I also had every reason to ‘just do it.’ I’ve lost friends and family to cancer of one kind or another. This reached a crescendo in 2016, when my good friend Angela Bond passed away at only 43 from breast cancer.

Cancer sucks! I recognised that I needed to take a wee moment, each year from there on in to honour our friendship and the fun we had together. She was afraid she would be forgotten. Every year since, I have organized a team. 2016, was our biggest and ’The Bond Girls’ raised more than any other team in NZ.

The run however was cancelled in Wellington because a major storm was in process,it was just too awful for words. But all those sponsors and all that money?! I felt responsible, indebted to them. All that generosity! I decided that while it had officially been cancelled, I was going anyway and anyone in the team who wanted to join me, could. Well, almost everyone turned up and away we went.

Your BCFNZ crew was there to see us off and even shot the starting gun and a pic or two! I’ll never forget that walk. Afterward, Ange’s husband Dave put on drink’s and nibbles for us, such a kind gesture. We all gathered to dry out, laugh, and consider doing it all again next year.

Since, team size has been varied. Sometimes it’s just me and one or two others- but that’s OK. Last year, I walked with George and his 5-year-old son Jax, in honour of Emeli, a early-stage survivor, who had intended on being there along side of me. But, she was not long out of chemo and had overestimated her energy levels. Her wee son was such a trouper- thinking it was but a wee stroll he had committed to.

He managed all 5km and then some on her behalf with McD’s at the end!! We named our team the All Pinks in Em’s honor- she’s a rugby girl at heart, but wonderfully, this year, Em is hoping to join us. As for 2019, our team is a pretty decent size and is called ‘Peb’s Pride’. Kate, a member of our team, lost her mum Betty to cancer this year. So, with Ange still on my mind for motivation to keep doing this, we dedicate this year’s walk to Betty. Back in 1960, in Darfield, a friend's son couldn't say Betty so he called Betty, Peb.

The nickname stuck and John, her husband called her that forever. He even named his truck ‘Peb's Pride’. Our group of strong wahine and tane, will walk in Peb’s honour- this time dressed as lions and lionesses! The team is always quality. For example, last year Mary was walking for her sister in Aussie who had been recently diagnosed. This year (as with most) there is Chelle, a bad-arse breast-cancer survivor.

So, while everyone is limbering up in unison at the front of the park, we will gather in a circle and give thanks. For those standing with us, and those who no longer stand but lay in rest. We will likely cry a little, and then - we get on with it. I have no doubt that we will be replicated all over the park- too many of us feel this! Friends continue to sponsor, and I’m always grateful for their amazing generosity.

Along the way is the unexpected donation, and another story. A story from someone who normally wears the biggest smile but has the deepest pain- a pain I would have known nothing about otherwise. What keeps me going back year after year is the stories. Like I said, cancer sucks!